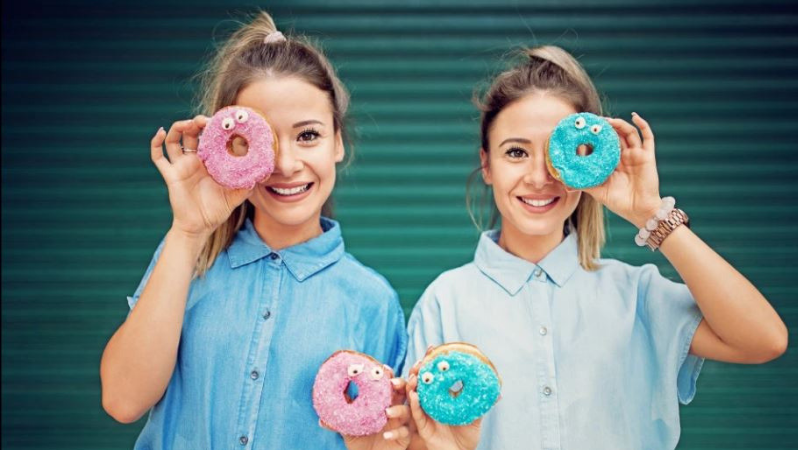 EVER wondered why some folk can eat what they like while you just have to look at a doughnut to put on 5lbs?

You might think that your genes are to blame but a new study has found that lifestyle is more often the culprit.

How you process food is so individual, that there’s little point in examining how many calories you consume – because it affects everyone differently.

That’s the conclusion of scientists who have been conducting a massive £21 million nutrition study.

They’ve been looking at the role diet and weight plays in identical twins.

Identical twins have the same genetic makeup, so you might think that they’d have the same propensity for putting on weight or keeping fat off.

But that’s not actually the case.

Professor Tim Spector, from King’s told the Mail that looking calories “isn’t useful in any practical sense since people respond differently to foods with the same number of calories”.

The study’s authors went onto say that the nutritional info on food packaging is “useless”.

Twins have different responses to food

Scientists looked at 1,100 participants who were mainly identical twins.

After fasting overnight, they were given a breakfast of white or rye bread and plant-based spread, or pasta or rice.

For lunch, they had a number of choices including spag bol or egg and chips.

Participants wore a 24-hour monitor on their arm, which tracked changes in blood glucose levels.

Blood tests were conducted every few hours to pick up any changes in fat levels as well as how well their livers were functioning and the production of brain chemicals like serotonin.

One (twin) could have ten times the amount of glucose or fat in their blood after the meal than the other, putting them at increased risk of weight gain or heart diseaseDr Sarah Berry

Poo samples were tested and everyone had to fill out questionnaires about meal timings and exercise habits.

Participants then got sent home to test themselves daily for two weeks – eating the same breakfast and various meals throughout the day.

The scientists found that twins eating the same meals could have different responses.

One of the study’s authors, Dr Sarah Berry, said: “One could have ten times the amount of glucose or fat in their blood after the meal than the other, putting them at increased risk of weight gain or heart disease.”

One example found that one twin might show no change in blood sugar if they exercised after a carbohydrate-rich meal, while the other twin’s blood glucose after the same meal shot up if they hadn’t had a good night’s sleep.

Sleep and gut health are important

That led the scientists to conclude that lifestyle factors like how well people slept and when they exercised had a huge impact on whether they put on weight or not.

And that suggests that you can improve your body’s response to food by changing things like what time you eat your meals and how much sleep you’re getting.

Two twins who took part in the study were Kinga and Kata Varnai, from north London.

Both eat healthily and exercise regularly and they’ve both been the same weight for ten years with no chronic illnesses.

On the first day, they both ate a breakfast of white bread (rather than their usual porridge with nuts and seeds) and they had completely different reactions.

When they had the rye bread breakfast on a different day, their responses reversed.

It turned out that both twins had “low average” number of gut bacteria strains but Kata had more than Kinga – which could explain why she could handle carbs better.

When they both ate a large brownie, Kinga’s blood sugar shot up but Kata’s remained flat.

Poor gut bacteria can increase the risk of weight gain and heart disease.

Scientists also found that when you should eat might vary from person to person.

Around a third of twins felt more comfortable eating later in the day and would skip breakfast and their results showed that this benefited their fat and sugar levels.

These findings basically prove that you have the power to change your metabolism.

If you’re overweight now, that doesn’t mean that you’re stuck like that (if you’re unhappy with your size).

Dr. Andrew Chan, Professor of Medicine at Harvard Medical School and a gastroenterologist at Massachusetts General Hospital, said that the findings were “reassuring”.

“It is reassuring that our genetic makeup only partially explains how our bodies respond to food.

“This underscores that our metabolism is not fixed – we have the power to change it. One exciting avenue is to tailor our diets to the bacteria in our gut that helps us metabolise nutrients.”

Prof Spector told the Mail that he was already making changes to his own eating habits as a result of regularly using a 24-hour glucose monitor.

“If I was having a sandwich, I’d usually choose brown bread with tuna and mayonnaise because it seemed fairly healthy,” he said.

“But I discovered it was much worse for my blood glucose than spaghetti Bolognese or a curry with rice.”

Having an orange juice with his sandwich pushed his blood sugar level into the diabetic range, but having an apple with the same sugar content had no effect at all.

What do blood glucose readings mean?

When you test your blood sugar, you’re looking for spikes and how quickly it takes for your levels to go back down.

The quicker your blood sugar recovers, the better.

Fasted (taking your blood sugar before breakfast): between 4.0 and 5.4mmol/L

Fasted (taking your blood sugar before breakfast): between 4.0 and 7mmol/L

Clearing fat fast is the key

The study also found that one of the big issues people face is the inability to clear fat fast.

Your fat levels normally rise for about six to eight hours after a meal then start dropping.

If your fats take too long to clear, that can lead to inflammation and weight gain.

And it can put your gut bacteria under strain.

The gut microbiome only starts working if there’s no food in your system – so having longer breaks in between meals is a good idea, as is avoiding fatty meals late at night.

STEAK YOUR LIFE ON TUNA

How to slash 2,500 calories from your diet – without giving up ice-cream or beer

Although you need a GP to evaluate the findings, the simplest way to track your body’s responses to food is to use a glucose monitor like the ones used by diabetics (you can get them on Amazon for £18).

You’d need to check your response to individual foods – like a banana – around two hours after eating.

As it can get quite complicated, it’s definitely worth chatting to your GP about.